Summary of The Power of Peers 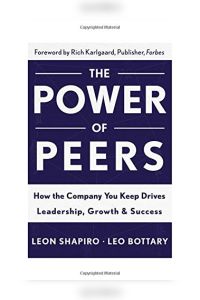 Chief executive officers, business owners and other top-level executives who join peer advisory groups can learn from their compatriots’ experience and may not feel as “lonely at the top.” Consultants Leon Shapiro and Leo Bottary show CEOs how joining a peer advisory group can help high-level leaders grow personally and professionally. In any industry, CEOs face common problems in HR, finance, marketing, and more. Having a sounding board of high-ranking industry peers aids troubleshooting. This three-part volume explains the power of “peer advantage,” the best ways to foster it and the factors that make a CEO peer advisory group successful. At times, Shapiro and Bottary use meaningless buzzwords – such as “optimize” or “accelerate.” And their advocacy openly stems from their leadership of an executive peer-group consultancy. However, reciprocal peer support at the highest corporate levels makes sense. getAbstract recommends this anecdotal manual as fresh meat for top dogs who want to join a pack.

Leon Shapiro and Leo Bottary work for Vistage Worldwide, an international peer advisory membership organization for CEOs, business owners and executives. Shapiro was its CEO from 2013 to 2016 and is now on the board of directors. Bottary is vice president of Peer Advantage.

Lonely at the Top

Many CEOs struggle with isolation. They have few people they can turn to for help or counsel. Nearly two-thirds of CEOs don’t receive leadership advice from outside their organizations. While CEOs might take continuing education courses, attend conferences or hire coaches to overcome isolation, the best solution is starting or finding a CEO peer advisory group.

CEO Paul Caskey needed help from his peers. In 1983, a year after graduating with a degree in chemical engineering, he joined CCP Inc., a company that made hair bleaching powders for the cosmetics industry. When Caskey started, CCP employed 10 people and had $640,000 in sales, but it wasn’t making a profit. He became general manager and built CCP to $4 million in sales within a few years. The company promoted him to CEO. During one August meeting with his CEO peer advisory group, he explained a dilemma unique to his company: Because moisture in the air reacts violently with hair bleaching powders, he had to shut down production over the summer, a 25% facility reduction. A fellow CEO asked, “Why is that acceptable? Isn’t there anything else you could be doing...