Summary of The Promise of a Pencil 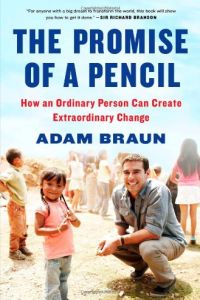 Adam Braun may be one of those much-maligned millennials, but he embodies the spirit of altruism. Born with many advantages and given an Ivy League education, he left a lucrative job at a Wall Street firm to apply his talents to helping others. In 2008, still in his 20s, Braun founded Pencils of Promise, an organization that builds schools, trains teachers and awards scholarships in the world’s most destitute communities. In this absorbing autobiographical account, he shares his journey from growing up in a wealthy New York suburb to founding a nonprofit that today breaks ground for a new school every four days. getAbstract recommends Braun’s inspiring story to anyone who dreams of helping others. If you tend to write off millennials as entitled and self-absorbed, this readable lesson about good will and dedication could change your mind.

Adam Braun is the founder of Pencils of Promise.

Adam Braun’s dad expected his kids to put their best effort forward. Adam, his brother Scott and his sister Liza followed “Dad’s Rules”: “Don’t do anything that you wouldn’t do if Dad were watching,” and “Choose your actions as if Dad were next to you.” Adam and his siblings understood that their father wanted only the very best for his children.

Adam’s parents reinforced the message, “Brauns are different.” Adam’s dad, Ervin Braun, was the son of Holocaust survivors who settled in Queens. He attended the University of Pennsylvania dental school where he met Susan, Adam’s mom. They settled in Greenwich, Connecticut, to practice dentistry and raise their family. Adam went to Greenwich High School, where he played basketball. During a tournament, he met Sam and Cornelio, two boys from Mozambique. A phony coach had enticed the boys to come to the US to play basketball. With Adam’s support, his parents offered the boys guardianship so they could attend Greenwich High and receive the education they had been promised. His parents taught Adam how much an education meant to people from developing countries with meager schools.