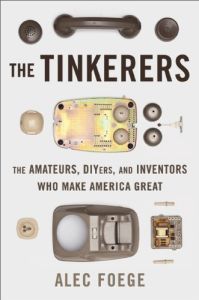 The Amateurs, DIYers, and Inventors Who Make America Great

This light reading from journalist Alec Foege is enjoyable if you start with the right expectations: it is not intended to be an in-depth exposition on innovation. Instead, it is an entertaining account of past and present innovators – some famous and others less so – but all equipped with a common urge to take things apart, mix them up and create something new. Despite the assets of this enjoyable book, Foege stumbles in two ways: His suggestion that America may or may not be facing a national crisis in creativity doesn’t come together cohesively enough and his paradoxical assertion that American people are innately more creative than other people would be maddening if it weren’t pretty easy to dismiss. Nevertheless, Foege’s random but interesting stories offer valuable insights into ways that schools, organizations and government agencies can encourage, support and accelerate innovation in education, commerce and public affairs. getAbstract suggests this accessible, sometimes even fun, book to business leaders, parents, educators and policy makers.

If you could attribute any country’s development to inventiveness and creativity, the United States might be that country. From the Founding Fathers – George Washington, Thomas Jefferson, Benjamin Franklin and Alexander Hamilton – to modern-day innovators such as Bill Gates, founder of Microsoft, or Dean Kamen, inventor of the Segway, American “tinkering” has helped produce a unique form of government and history’s largest economy. Even at the amateur level, invention has long been a national obsession, whether in mechanics, design or, more recently, “virtual tinkering” on computers.

Yet in today’s era of short-term thinking and risk avoidance, corporations and governments no longer fund pure experimentation as they once did. Even the labels on consumer products explicitly warn buyers not to tamper (or tinker) with the merchandise or the mechanisms inside. Today’s popular gizmos are so complicated that few people are inclined to look inside their plastic cases to see how they work.

American education’s fixation on standardized test scores has leached creativity and experimentation from the classroom. At home, busy parents schedule their children’s ...

Journalist Alec Foege founded Brookside Research LLC. He has written four books, including Right of the Dial: The Rise of Clear Channel and the Fall of Commercial Radio.