Summary of This Is Why We Can’t Have Nice Things 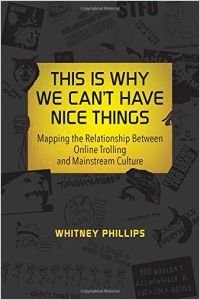 University professor Whitney Phillips examines the culture of online trolling. Her prism into this world surveys those US residents who revel in this online subculture and identify as members of it. Phillips presents a complex, multilayered portrait of the mores, emotions and tactics of people who intentionally cause distress to others. She interviewed numerous trolls and directly participated in “trolldom” by opening herself up to attacks. She links trolling to the larger culture and shows how these individuals simply mirror attitudes and methods embraced by sensationalist mainstream media. She unflinchingly depicts trolls sexual, racial and scatological humor, which some readers may find offensive, as, indeed, the trolls intend.

Whitney Phillips is an assistant professor of literary studies and writing at Mercer University’s Penfield College.

Trolls set out “to cause disruption and/or trigger or exacerbate conflict for the purposes of their own amusement.” The word “trolling” first appears, connected to online activity, in a 1992 entry in the Oxford English Dictionary. Trolls believe “nothing should be taken seriously,” and they demonstrate this belief by striking out at sincerity whenever they find it. Trolls often attack people who are suffering from a tragedy. They even more vigorously harass people who attach themselves to misfortune with sympathetic grieving. By definition, trolling is unkind, outrageous, scatological, juvenile and unfair. Trolls attack anonymously and thrill in pummeling the emotions of people they don’t know. Their victims cannot fight back, but when they try, trolls hit them twice as hard.

Trolls understand how to infuriate the mainstream media. The way trolls assault news stories reflects the some of the sensationalist coverage and emotional manipulation coming from the press itself. Predictably, the media express outrage about trolling.

To many people, trolls represent the evil side of the Internet. They constitute a vast, unidentifiable...