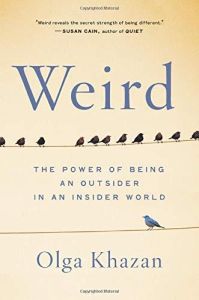 The Power of Being an Outsider in an Insider World

If you’ve ever felt like you don’t fit in, Atlantic magazine writer Olga Khazan has some people for you to meet. As a Russian-Jewish immigrant raised in rural West Texas, Khazan always felt set apart from those around her. In time, however, she learned that feeling “weird” is not such a bad thing. Khazan uses her life story, psychology research and interviews with other distinctive people, to explore the power – and struggle – of feeling different. Given self-acceptance and mental strength, Khazan explains, you can learn to make weirdness your superpower.

Michael Ain did well in college, but, due to his short stature, he had a hard time getting into medical school.

Michael Ain has many remarkable accomplishments. He’s an award-winning graduate of Phillips Academy – a prestigious high school – and an honors graduate of Brown University, where he was an athlete.

Ain wanted to attend medical school. He had excellent grades and an impressive array of college extracurricular activities. But, when he spoke with a student counselor who helped Brown students get into med school, the counselor took one look at Ain and tried to dissuade him from applying. All he saw was Ain’s height: four feet, three inches tall – about the same height as an average nine-year-old. Ain’s small stature is the result of a medical condition, achondroplasia, better known as dwarfism.

As a young boy, Ain developed an interest in medicine because of his physical condition, which required regular visits with doctors and specialists. Ain respected the physicians who treated Little People like him with consideration. He imagined himself as a doctor...