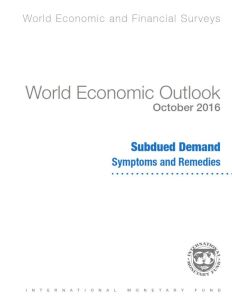 The world economy continued to stumble in 2016, years removed from the global financial crisis and the Great Recession. The impacts of slow GDP growth, persistent deflationary environments, China’s conversion to a consumer economy and weakening trade growth vex policy officials. Uncertainties associated with the Brexit vote and the incoming US presidential administration cloud these dynamics. In this biannual review from the International Monetary Fund, experts describe economic conditions and delve into broad-based analyses of trade, deflation, China and migration. getAbstract recommends this authoritative and highly detailed report to executives and investors looking to steer a course through the global economic topography.

The Economic State of the World

Weak GDP growth, sticky inflation pressures, low to negative real interest rates and decelerating trade flows continued in 2016. The numbers bear out the ongoing challenges policy makers face in getting the world economy to reach escape velocity. For 2017, experts anticipate some rebound, largely in the developing countries. However, more headwinds than tailwinds propel the forecasts. Three broad areas have the most influence on growth prospects: trade, inflation and “cross-border economic spillovers” from economic migrants and from China’s reduced growth as it makes the transition to a consumer economy.

Forecasters expect global GDP growth of 3.1% for 2016. They anticipate 1.6% in advanced economies and 4.2% in emerging markets. Growth in the United States in 2016 will clock in at 1.6%, while the euro area will see growth of 1.7% and China can expect 6.6% growth. Inflation will register 0.8% in developed countries and 4.5% in the developing world. Interest rates are projected to be 1.0% on US dollar deposits but −0.3% on euro accounts. Trade growth will likely remain at 3%, where it has been since 2012, and that’s less than half...

2016 Article IV Consultation with the United States of America
7