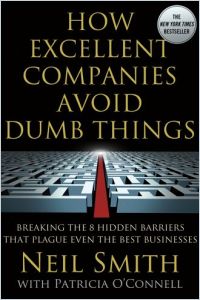 Leaders of even successful companies unwittingly make bad decisions and costly mistakes. Consultant Neil Smith identifies “eight hidden barriers” that keep companies from reaching their full potential and explains how to shatter them. Recognizing barriers is the first step, but, to create lasting change, companies must reshape their corporate culture from the top down and employees must take ownership of their ideas. Smith identifies both obvious and subtle obstacles, though he can get bogged down in details. getAbstract recommends Smith’s diagnosis to executives seeking to increase their companies’ efficiency and profits.

Neil Smith is CEO of Promontory Growth and Innovation, a corporate consultancy. Patricia O’Connell is a business writer and former editor at BloombergBusinessweek.com.

Regardless of their size or industry, all companies inadvertently erect hidden barriers that keep them from doing their best work. These obstacles may be structural or behavioral, and they may appear across all levels of an organization. There are eight main barriers:

Companies often suffer because internal leaders don’t want to deal with controversial issues. Managers avoid making decisions because they won’t risk angering one staff member in favor of another. Although CEOs are the “ultimate boss,” they don’t want to be seen as micromanagers or “risk having a revolt.” People who avoid confrontation get promoted quickly because they’re personable and nonthreatening. Their promotions leave problems festering.

To break this barrier – and all other barriers – change your processes. When the people in a company work together to solve problems, managers can no longer avoid making decisions. With a structured process in place, a workforce will focus more on solutions and less on who errs. Although most people are capable of dealing with controversy and conflict, three personality types are particularly prone to dodging...

The Inside Gig
9
The Customer-Driven Culture: A Microsoft Story
9
Hit Refresh
8