Review of The Diversity Delusion 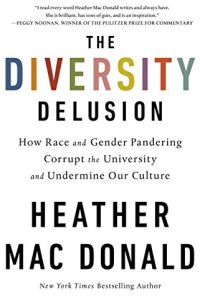 Political correctness is far too liberal, argues conservative commentator Heather Mac Donald in this heart-felt takedown of progressive culture on college campuses. Affirmative action, she claims, means elite universities reject qualified white and Asian applicants in favor of black and Hispanic students whom, she argues, lack qualification and are doomed to fail. She dismisses a purported epidemic of campus rape as a hoax, and sets out to debunk other liberal concerns. Mac Donald’s partisan tone will leave those who agree with her as more likely to keep reading than those who don't.

Heather Mac Donald is the national bestselling author of The War on Cops, a fellow at the Manhattan Institute and a contributing editor at the public policy magazine and website City Journal.

A culture of hypersensitive political correctness has taken over American college campuses.

Conservative commentator Heather Mac Donald argues that within the environment on today’s US campus, even the faintest examples of discrimination based on race, gender or sexual preference can blow up into major showdowns. In 2017, Mac Donald claims to have learned firsthand how intolerant campus politics have become. She was scheduled to speak about her book The War on Cops at Claremont McKenna College in California. Student activists on Facebook called for blocking her speech, describing Mac Donald as a “notorious white supremacist fascist.”

Mac Donald describes a throng of angry protesters blocking audience members from attending her talk. The protesters chanted about the racism of Claremont McKenna College – even though, Mac Donald says, the school admits black and Hispanic students with SAT scores that are on average 200 points lower than those of white and Asian students. Mac Donald spoke to an empty auditorium while her remarks were streamed online, and the police escorted her on and off campus.