Summary of The Inner Lives of Markets 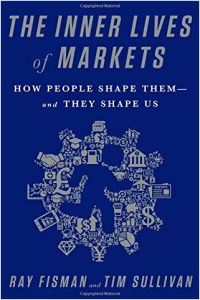 In the 21st century, markets in which competing sellers and multiple buyers meet face-to-face and haggle over prices are increasingly rare; that’s the classic free market model guided by an invisible hand. Instead, platforms like eBay are emerging in ever-increasing numbers, transforming marketplaces and replacing the invisible hand with customized interactions among participants. In this enlightening travelogue of markets and economic theories, authors Ray Fisman and Tim Sullivan use a breezy, anecdotal style to illuminate how people make decisions in their day-to-day economic lives in this newly emerging world. getAbstract recommends this intriguing overview to general readers as well as to executives and investors.

Buying and selling are part of human nature. Markets give people a way to assign value to goods, services and experiences, as well as to obtain what they want. The free markets central to established economic thinking operate through buyers and sellers interacting directly to set their own prices and make their own exchanges. This system creates desirable outcomes in theory, but – in reality – it often yields unwanted results. In contrast, the market makers emerging in the early 21st century, such as eBay, design platforms with rules to bring together buyers, sellers, payment providers and other parties. While these still-evolving marketplaces enable buyers and sellers to conduct transactions smoothly, these platforms call for new economic and social understanding.

Trade Is Intrinsic to Human Behavior

An informal market arose in German prisoner of war (POW) camps during World War II. The Red Cross delivered packages to the camps containing equal amounts of commodities such as canned milk, chocolate, sugar, coffee, soap and cigarettes. Because individual inmates did not value all the items the same, prisoners...

Radical Markets
8
Carlos Slim
8
Investment Banking Explained
7
In Defense of the IPO, and How to Improve It
8
When More Is Not Better
9
Boom
9