Summary of The Coming Jobs War 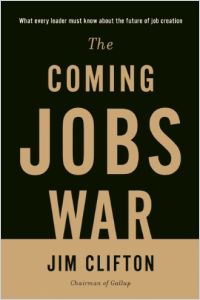 Jobs matter, pollster Jim Clifton argues persuasively in a report that combines a breezy tone with weighty subject matter. Clifton makes a compelling case that job creation and economic growth pose the most significant challenges for world leaders. He offers intriguing insights into a number of related topics. For instance, he argues that behavioral economics continues to take a back seat to the less-realistic classical school of thought. In another thought-provoking theory, Clifton holds that local, behind-the-scenes business leaders play an enormous, underappreciated role in job growth. He demystifies the economic jargon surrounding job creation and provides a succinct explanation of why jobs matter. He reports on employment patterns in regions of the US and explains why the societies that survive will be the ones that generate good jobs. The US jobs picture has improved since the publication of Clifton’s ideas, but his arguments and insights remain timely and illuminating. getAbstract recommends his rigorous study to business students, local businesspeople, policy makers and corporate leaders seeking insight into job creation.

Jim Clifton is chairman and CEO of Gallup. Under his leadership, Gallup expanded from a US company to a global organization with offices in 30 countries.

Jobs are the most crucial issue of modern times. The world population is seven billion; five billion are adults aged 15 and older. Some three billion of those people want jobs – formal jobs with regular hours, full-time schedules and predictable pay. But only 1.2 billion jobs exist, leaving 1.8 billion people unemployed. Many people scrape by in informal positions, working as street vendors or at occasional odd jobs. That isn’t enough.

The Gallup organization created a comprehensive poll, translated it into hundreds of languages and administered it in 150 countries. People worldwide who responded cite jobs for themselves and their children as their greatest hope.

Impoverished people in developing nations are not the only ones worrying about jobs. With unemployment once topping 10...

Wellbeing at Work
7
It’s the Manager
8