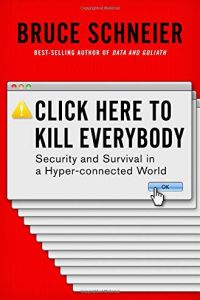 Internet security expert Bruce Schneier provides an eye-opening account of the failure of big tech and public policy-makers to provide internet security. He then covers the potentially catastrophic consequences of that neglect. Schneier, who is a best-selling author and lecturer at the Harvard Kennedy School and Berkman-Klein Center for Internet & Society, details the risks of failing to act to improve cybersecurity. He offers ideas on actions you can take and runs through the obstacles blocking such actions in this must-read alert for everyone who spends time online.

Security expert and best-selling author Bruce Schneier is a fellow and lecturer at the Harvard Kennedy School and at Berkman-Klein Center for Internet & Society.

Technology is moving toward “Internet+,” connecting nearly everything to the web. This is insecure and vulnerable to attack by hackers and hostile governments.

Schneier begins with the sheer scale of the internet. As of 2017, he divulges, 8.4 billion devices were connected to it, including computers, consumer electronics, appliances, cars, banks and power grids. In the future, nearly everything you buy is likely to have a computer chip that connects it to the web. This is the Internet of Things (IoT) or “Internet+,” which will affect every part of people’s lives, the economy and society. In its current state, the internet is highly insecure. Its original designers sought to make it accessible in a way that is no longer compatible with how companies and governments use it. “Up to now,” the author writes, “we’ve generally left computer and internet security to the market. This approach has worked satisfactorily, because it mostly hasn’t mattered.”

Criminal hacking into personal, corporate and government networks has become pervasive, Schneier reports, and the consequences are building. Governments and militaries use the internet’s vulnerabilities to engage in campaigns of cyberwarfare and espionage. Recent examples include interference in elections in several countries, as well as attacks on critical infrastructure such as power grids. The risks continue to grow and could, Schneier fears, directly threaten human life as bad actors’ ability to hack and control networked cars or airplanes becomes a threat.