Summary of How Will COVID-19 Affect Machinery and Industrial Automation? 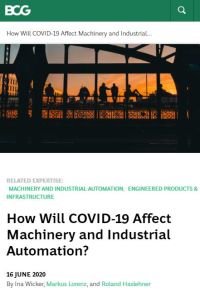 You know the economy is taking a massive hit from COVID-19, but is the pandemic as bad as the 2008 financial crisis? If it is, will your company suffer more, or less than it did then? If you’re part of the machinery and industrial-automation industry, it probably depends on which sector your company serves. Regardless, the Boston Consulting Group has compiled some statistics, projections and tips to help you pull through the crisis. The BCG report encourages leaders to look beyond their ruined plans, find solutions for scenarios they may face and “shape opinions in their own environments.”

Sales in the machinery and industrial-automation industry have a robust correlation to GDP.

The 2008 financial crisis revealed that the fate of the machinery and industrial-automation (MIA) industry is entwined with GDP. GDP losses tends to result in exaggerated drops in industry sales: When the GDP dropped by 2% in 2008, industry sales dropped by 15%.

There’s a lag between the unfolding COVID-19 crisis and the effect it will have on the industry – use the time to gather and analyze data, question previously held assumptions, and imagine new scenarios for your company.

MIA industry recovery from the 2008 crisis varied by region.

Examining how the MIA industry faired in various regions after the 2008 financial crisis may provide clues to the post-pandemic future. The Asia-Pacific region experienced the fastest recovery after 2008, with a V-shaped ricochet that took about a year. In 2008, the region garnered about 287 billion dollars in revenue. The region experienced minimal losses in 2009, with...