Summary of Talking to Crazy 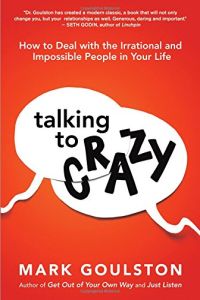 Psychiatrist Mark Goulston explains why some people act irrationally and helps you identify different modes of acting crazy. He shares proven psychiatric tricks and techniques for dealing with people who behave somewhat off the wall, but he carefully distinguishes between momentary irrationality and serious mental or emotional disorders (in which case, he says, enlist professional help). He provides a rich toolbox for the situations you can try to handle, if only to get through someone’s temporary outburst in the office. Some of his strategies apply to dealing with people in the workplace, while others will help you if a loved one behaves irrationally. Goulston’s career is rich in experience and expertise, even if a few of his examples seem somewhat removed from the real world, a little manipulative or even self-protectively callous. While never giving medical advice, getAbstract suggests his insights might be useful to anyone who leads or interacts with other people.

How to Deal with Someone Who Acts Crazy

Author and psychiatrist Mark Goulston drove home after a difficult day. Preoccupied, he inadvertently cut off a pickup truck. The driver of the pickup honked angrily at Goulston, who waved back. Still driving along in a mental fog, and less than a 1,000 yards down the road, Goulston cut off the pickup truck again. This enraged the driver, who caught up with Goulston and forced him to the side of the road. The driver jumped out of his truck and raced to Goulston’s car. The man was enormous – 6 feet 6 inches tall and 300 pounds – and angry.

The big man hammered on Goulston’s window, cursing. Goulston rolled down the window said calmly, “Have you ever had such an awful day that you’re just hoping to meet someone who will pull out a gun, shoot you and put you out of your misery? Are you that someone?” Dumbfounded, the man replied, “What?”

The average person might try to reason with or argue with a big, angry guy. Either response probably would have provoked him to attack Goulston. The man’s irrational tantrum popped Goulston out of his fog. His experience as a psychiatrist and his professional instincts kicked in, and he found...

You Don't Have to Be Ruthless to Win
8
Making Up Your Own Mind
9
Be Like Amazon
8
Get Out of Your Own Way
7
Girl, Wash Your Face
8
The MBA Reality Check
8 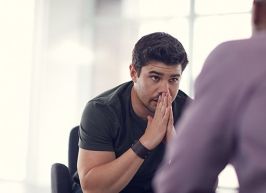 Dealing with Difficult People at Work