Summary of The Great Race 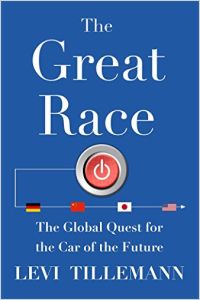 The internal combustion engine has had its day. The big upheaval won’t happen tomorrow – or even by 2025 – but eventually, the gas pump will be a museum relic and electric cars will be common. In this exhaustively researched, compelling history, auto industry expert Levi Tillemann offers an overview of the field with a focus on how Japanese companies rose to prominence. The author – who learned Japanese and Chinese so he could delve into those nations’ auto industries – details the birth and development of the electric car and explains how its future is likely to unfold. getAbstract recommends his insights and predictions to car lovers, futurists, investors, entrepreneurs, history buffs, gearheads, carmakers, dealers and all drivers.

Levi Tillemann is the Cal and Jeff Leonard Fellow at the New America Foundation. He served as Special Advisor for Policy and International Affairs at the US Department of Energy.

The Race Is On

American auto manufacturers dominated the world market in the first half of the 20th century. By the 1980s, however, consumers turned to Japanese companies such as Honda and Toyota because of their cars’ quality, fuel efficiency and emission controls. With electric-based vehicles set to gain market share in the future, many factors – technology, politics, the economy, industrial policies, the public and private sectors’ dynamics, and international environmental policies – will determine which countries succeed in the “Great Race” to mass-market a desirable electric car.

Ford Motor Company’s introduction of the assembly line in early 1913 made America the undisputed leader of the automotive industry. An earthquake that struck Tokyo in 1923 forced Japan to import a large number of Ford Model T cars, which maneuvered through the city’s rubble more efficiently than horses or Japanese vehicles. The Japanese converted Model T vehicles into buses for public transportation. Capitalizing on the Model T’s popularity, Ford and General Motors (GM) built plants in Japan. In 1934, they sold some 35,000 vehicles; the Japanese sold barely 1,000 domestic cars.

What Did We Know? What Did We Do?
8
The Third Revolution
8
Inconspicuous Consumption
9
Our Time Has Come
8
Leadership Is Language
9
Fair Play
8