Summary of The Predator State 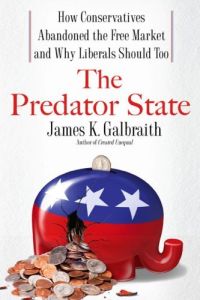 James K. Galbraith, son of noted economist John Kenneth Galbraith, wrote this book at his father’s suggestion. Indeed, he spends a fair amount of ink defending his father’s ideas and legacy, which were pushed aside by the Reagan Revolution and its aftermath. Now, in the wake of the administration of Republican President George W. Bush, who even admitted to abandoning free-market principles, the time is ripe to see what liberals really have to offer. Galbraith suggests: not much. Intimidated by the force of the conservative wave that swept them from power almost three decades ago, liberals have adopted conservative frameworks, says Galbraith. They genuflect to market supremacy, free trade, tax cuts and deregulation – ideas conservatives have dropped. getAbstract finds that Galbraith provides a thought-provoking analysis of conservative rule. He offers plenty of polemics, Bush-bashing and rhetorical flourishes that will delight liberal readers. Conservatives, who perhaps feel that their exile actually began with Bush II, may find little to cheer but a good bit to agree with herein.

Economist James K. Galbraith holds the Lloyd M. Bentsen, Jr., chair of government/business relations at the LBJ School of Public Affairs. A Levy Economics Institute senior scholar and chair of the board of Economists for Peace and Security, he is a former executive director of the U.S. Congress Joint Economic Committee.

The election of Ronald Reagan seemed to repudiate decades of liberal rule and ideology: out with planning, federal deficits, protectionism and regulation; in with monetarism, tax cuts, free trade, balanced budgets and market rule. Yet, the “Reagan Revolution” did not deliver the change it promised. Reagan failed to act like a free trader when he negotiated de facto import quotas (“voluntary restraints”) with Japanese carmakers. Monetarism proved to be little more than a slogan, impossible to implement effectively in an era when the market produced many new forms of money.

Contrary to what many believe, the conservatives did not destroy the New Deal’s institutions, nor did they ruin institutions established by Lyndon B. Johnson and Richard Nixon. They did, however, damage these institutions, particularly by allowing predators to capture and exploit them for private gain. During George W. Bush’s presidency, lobbyists and private interest groups appropriated the state’s regulatory machinery and used it to their advantage.

The right has largely abandoned its untenable notions of supply-side economics, free trade...

The Financial Crisis and the Free Market Cure
7
The Constitution of Liberty
8
How Population Change Will Transform Our World
8
Capitalism’s Toxic Assumptions
7
Counter-Revolution
8
55, Underemployed, and Faking Normal
9