Summary of The Social-Distancing Culture War Has Begun 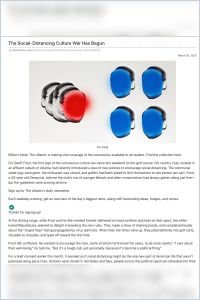 McKay Coppins, author of The Wilderness and a staff writer at The Atlantic, explores how some Americans resist social distancing and other coronavirus preventative behavior in the name of political beliefs. Compliance and its lack, according to Coppins, seems to follow Democratic or Republican loyalties, respectively. He interviews people from both parties to determine the path of this latest culture war. This lively, informative Atlantic piece provides an intriguing, if troubling, illustration of how almost anything in American life can be bent to political ends.

Social distancing has, in certain places, become an expression of political beliefs.

Geoff Frost, a 43-year-old Democrat, noticed the commencement of cultural warfare related to the coronavirus at his Atlanta, Georgia country club golf course. To enforce social distancing, the club closed its restaurant, removed water bottles and limited carts to one per person. Though club members of opposing political views had always been cordial with one another, the new policies fomented division.

Frost and his friends went to the driving range. They used hand sanitizer and kept six feet between them. Older Republican members ostentatiously shook hands and talked at high volume, casting coronavirus as a “stupid hoax.” They crammed into golf carts two by two. Frost wanted to urge the men to be more cautious, but, he realized, “It’s become a political thing.”

“As the coronavirus now emerges as another front in the culture war, social distancing has come to be viewed in some quarters as a political act—a way to signal which side you’re on.”

At first, Americans seem to embrace social distancing. Schools shut down in all states, regardless of their political majority. President Donald Trump made light of the pandemic and then changed his views. Those who echo him in the media followed his erratic course. This led, briefly, to consensus. Both Fox News and MSNBC offered the same hand-washing and social distancing message.

Then Trump demanded that the nation go back to its previous ways. He issued a now-famous tweet, urging that the cure “not be worse than the problem…” Though Trump backed off again within a few days, the usual pattern followed: Democrats assailed him; the press joined in and everyone in “MAGA-world” jumped to Trump’s defense. The coronavirus is now a weapon in the culture war and many people consider social distancing or its absence as a statement of political belief and a way to show where you stand.

Jerry Falwell, Jr. reopened his evangelical Liberty University, though local officials urged him against it. The Federalist, a conservative web magazine, suggested holding “chicken-pox parties” to spread the virus. Right-wing media figures and politicians called for letting the older and unwell die if that meant the economy could thrive. “I would rather die than kill the country,” radio host Glenn Beck insisted. Texas Lieutenant Governor Dan Patrick told Fox News that “70-plus” people like him could handle their own care. Conservative pundit Dennis Prager said that using social-distancing tactics to halt the spread of the virus was like appeasing Nazis. “No one can die?” he said. “Then it’s not a war.”

“The polarization around public health seems to be accelerating.”

A sales representative named Bret from Plano, Texas said he and his conservative community had little fear of the outbreak. He regarded most news as “panic-mongering” by anti-Trump media. He had wanted business to begin again at Easter, 2020. Store manager Terry Trahan in Lubbock, Texas asserted that “toxic tribalism” shapes people’s outlooks. Democrats regard the outbreak as more threatening, he believes, and Republicans downplay it. He thought Democrats who continued to urge further preventative measures were seeking justification for their earlier panic.

Scientists and health experts maintain that Americans must practice social distancing to slow the coronavirus spread.

Experts fear that attaching political views to commonsense practices might add to the public’s danger. Many who don’t practice social distancing have no choice – they have to work. Others remain uninformed. And, of course, tactics in the fight against the pandemic must be weighed against economic concerns.

Alabama and Mississippi’s Republican governors balked at “mitigation policies.” Polls showed that Republicans nationwide worried less about coronavirus than Democrats did. In 23 of the 25 states with the lowest drop in personal travel, Trump won the last election. One factor in this may be that, as of this writing, the coronavirus had been most virulent in coastal urban centers.

Katherine Vincent-Crowson, a self-defense teacher in Sidell, Louisiana, loves the philosophies of author Ayn Rand. She found Louisiana’s shelter-in-place order to be “militaristic.” Much more galling for her is “self-righteous” posting on social media casting blame on those who don’t stay at home. She described her views as “libertarian,” and expressed great displeasure at anyone trying to control her behavior.

Author of The Wilderness, McKay Coppins is an Atlantic staff writer.

The Billion-Dollar Disinformation Campaign to Reelect the President
9

Coronavirus Is a Disaster for Feminism
9
Coronavirus Outbreak: How Scared Should You Be?
9
In 2020, Disinformation Broke the US
9
It’s Time to Get Serious About Social Distancing. Here’s How.
9
Coronavirus in China Fuels Crowd Psychology
8
The Coronavirus: How to Stay Safe
9