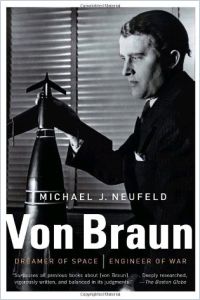 When German rocket scientist Wernher von Braun came to the U.S. after World War II to build rockets for the Americans, he became famous as a brilliant visionary engineer, as a manager of complex technology projects and as a charismatic, handsome genius in his field. Walt Disney made memorable TV shows about von Braun’s contribution to science, and Collier’s magazine spotlighted him and his plans for manned spaceflights. Neither Disney nor Collier’s included details of von Braun’s past – and his Faustian bargain with the Nazis – but aeronautics historian Michael J. Neufeld’s biography covers it all. He captures von Braun’s entire story, from child prodigy obsessed with rockets to SS major developing deadly V-2 rockets for Germany to science celebrity living large in America. getAbstract recommends this book to anyone who wants to learn about von Braun’s remarkable intellectual gifts, his singular accomplishments, his Nazi past, his contributions to the U.S. space program and, due to his televised teaching, the country’s overall acceptance of the wonder of science.

In 1912, Wernher Magnus Maximilian Freiherr von Braun was born to a family of aristocrats in Prussia. His father, Magnus, a hereditary baron, held a series of civil service positions, rising and falling with the political winds. In 1920, he took a job in Berlin, where Wernher and his brother Sigismund studied at the Wilhelms-Gymnasium, later part of the eminent French Gymnasium. A prodigy, Wernher was fascinated with science and technology, which also interested his elegant mother, Emmy, whose family nickname was “Madame Curie.” Wernher’s parents gave him a telescope for his 13th birthday; in his eyes, it was the greatest possible gift. He attended boarding school at Ettersburg castle, where Hermann Oberth’s book, The Rocket into Interplanetary Space, enthralled him. Since mathematical formulas filled the book, Wernher decided to learn as much math and physics as possible. Gifted in these areas, he began “rash experiments” with homemade rockets, causing a fire, breaking a greenhouse’s glass pane and dismaying his teachers.

In 1928, Wernher transferred to a school on Spiekeroog, a North Sea island. His interest in rocketry and space travel became...