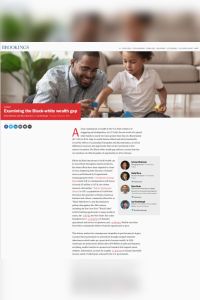 Policy experts Kriston McIntosh, Emily Moss, Ryan Nunn and Jay Shambaugh illustrate how the wealth gap between white and black Americans persists. Their research shows that the intergenerational transfer of wealth carries the greatest weight in explaining the inequity, and they cite potential remedies through reforms to the tax code and changes in public resources. Readers seeking a broad overview of the economic impacts of systemic racism will find this a worthwhile guide.

Wealth disparities between white and black Americans have persisted over time.

Black Americans have encountered formidable challenges to accumulating wealth ever since the founding of the United States. More than two and one-half centuries of enslavement gave way to successive forms of institutionalized discrimination designed to limit African Americans’ economic prosperity.

“Gaps in wealth between black and white households reveal the effects of accumulated inequality and discrimination, as well as differences in power and opportunity that can be traced back to this nation’s inception.”

Some examples are the legislative mishandling of the Freedman’s Savings Bank, which financially devastated depositors in 1874; the 1921 carnage in Tulsa, Oklahoma’s Greenwood District, known as Black Wall Street; the 20th-century Jim Crow laws in the South; post-World War II exemptions of African Americans from national employment support; and redlining by financial institutions.

The leading contributors to the wealth gap are intergenerational bequests, which are much greater for white families than for black families.

The median 2016 net worth was $171,000 for a white family and $17,150 for a black family. A sizable racial wealth gap prevailed over the 1989 to 2016 time period; the Great Recession reduced a black family’s net worth by more than 44%, compared to a white family’s loss of only a bit more than 26%. Racial wealth disparity exists within every standard demographic and socioeconomic dimension. Differences in age, income, education and indebtedness – which is actually more prevalent among white families – do not account for the chasm.

“This history matters for contemporary inequality in part because its legacy is passed down generation-to-generation through unequal monetary inheritances which make up a great deal of current wealth.”

Bequests comprise a substantial share of people’s net worth in America. By age 75, a black head of household has a median net worth of less than $50,000, in contrast to a white person’s more than $300,000. The large, long-term divide in net worth translates into a significant disparity in accumulated assets available for intergenerational wealth transfer.

Tax and fiscal policy reform can help shrink the gap.

Inheritances in the United States are now mostly untaxed, and low taxes on wealth – relative to the higher levies on earned income – serve to perpetuate the transfer of large inheritances across generations, which maintains the racial financial gap. Thus, reforming the taxation of inheritances and wealth income is an obvious place to begin. The proceeds from those reforms could fund fiscal programs that enhance economic opportunities for black Americans.

Kriston McIntosh and Emily Moss are Hamilton Project executives at the Brookings Institution, where Jay Shambaugh is a senior fellow. Ryan Nunn is an assistant vice president at the Federal Reserve Bank of Minneapolis.