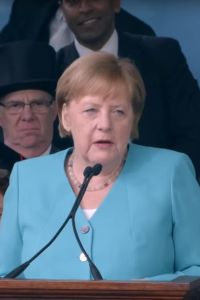 In an inspiring message to Harvard’s graduating class of 2019, German chancellor Angela Merkel harkens back to her youth in East Germany. Communicating through a translator, she recalls living behind the Iron Curtain during the Cold War and draws parallels between the challenges her generation faced and the obstacles that confront today’s young leaders. Merkel’s message is ultimately hopeful and uplifting. She encourages young leaders to be daring while respecting others and choosing an honorable path, and she reminds her young audience that even that which seems unbendable can, with pressure, bend.

Angela Merkel is the chancellor of Germany. She served as the leader of the center-right Christian Democratic Union from 2000 to 2018.

Even seemingly intractable problems can bend to change.

Angela Merkel grew up in East Germany, a dictatorship, during the Cold War. Citizens lived in a constant state of fear while their government spied on them and persecuted dissenters. Merkel graduated university with a degree in physics in 1978. On her way to and from work each day, she passed close to the Berlin Wall. She longed to scramble over the wall and enter West Berlin. Though the wall inhibited her freedom and movements, it couldn’t restrain her thoughts, wants and imagination.

In 1989, a freedom movement swept across the Eastern Bloc. It gathered momentum, and the Berlin Wall crumbled. Suddenly a world of opportunities opened for Merkel, which taught her that even the most dire situations can buckle to forces of change.

Will the Future Be Human?
9
End Times
7