Summary of 12 Women Leaders That Changed the World in 2020 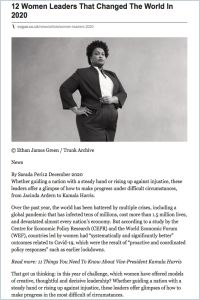 A study by the Centre for Economic Policy Research found countries that women led during the 2020 pandemic fared significantly better than those men led. Journalist Sarada Peri lauds a dozen female leaders in British Vogue, including heads of state, and explains how women in leadership made the world better in 2020. From high-profile politicians like Kamala Harris and Jacinda Ardern to courageous activists like Nemonte Nenquimo and Bilkis Dadi, the author recognizes these leaders’ incredible work during a difficult year.

In 2020, women improved the world by embracing diversity, giving minorities a voice and taking on vital political roles.

Women worldwide made a significant contribution to their nations and communities during the COVID year of 2020. Here are some notable standouts:

The Polling Crisis Is a Catastrophe for American Democracy
9