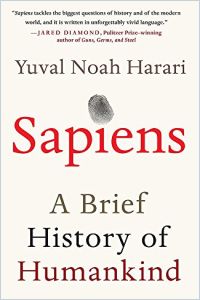 Yuval Noah Harari’s 400-page history of mankind is a timely meditation on the nature of Homo sapiens’ fickle path: a history not made by great leaders, determinism, guns, germs or steel, but by unexpected nuances of existence. Harari concludes that Homo sapiens prevailed by happenstance, a capacity for language and socialization, curiosity, mercantile fervor and technological prowess – which may yet destroy everything. Harari’s perspective moves among the telescope, microscope and stethoscope, hailing the synchronicities of capitalism, religion and technology. He tracks happiness as a measuring stick of progress. Harari is uneasy about humanity as the intelligent designer of a new “superhuman” – a cyborgian, a machine whose inorganic longings may not include happiness. While always neutral on matters of personal belief, getAbstract recommends this roiling, off-the-beaten path tour de force to readers with patience and open minds, even those who might disagree along the way.

Between 70,000 and 30,000 years ago, Homo sapiens invented boats and sewing needles, expressed artistic talent, and saw the benefits of business relationships.

The human continuum began with a handful of six similar species. They gradually refined their abilities, followed their curiosity and won out against each other, largely by happenstance. The leading candidate, Homo sapiens, had a large brain that needed a large bone box to protect it and a sound skeletal structure to carry it on two legs. It had fine hands with an intricate weave of muscle and nerve, the ability to gossip, and the desire to socialize and raise offspring.

From East Africa, these Sapiens flowed into Europe and, one theory says, intermarried with the Neanderthals. A more popular theory holds that Sapiens eradicated the...