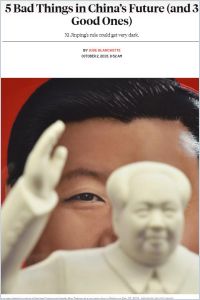 Chinese President Xi Jinping has tightened his grip on the country, repressed internal opposition and given himself the power to rule for life. Will Xi succeed in his push toward a more totalitarian government in China? Jude Blanchette from the Center for Strategic and International Studies in Washington, DC, weighs the evidence both for and against that political possibility. She examines the most likely scenarios for China's future trajectory in this informative Foreign Policy editorial.

Jude Blanchette holds the Freeman Chair in China Studies at the Center for Strategic and International Studies (CSIS).

Under the leadership of Chinese President Xi Jinping, China has moved closer to totalitarianism than at any time since the Tiananmen Square crackdown 30 years ago. Besides expanding state surveillance, Xi has intensified government control over all aspects of society, leaving little room for political dissent or public intellectual debate.

Throughout China’s history, sinologist Richard Baum has observed, the state has gone back and forth between “tightening” (shou) and “relaxation” (fang) of political control. In the near future, it is unclear whether China will continue on its current trajectory of repression or whether Xi or his possible successor will be compelled to loosen...

The Problem With Xi’s China Model
7
China’s Coming Upheaval
7
We Have Been Harmonised
9
Without Democracy, China Will Rise No Farther
7
Party Man
7
China’s War on Taiwan Won’t Start in Taiwan
8