Summary of Mobs, Messiahs, and Markets 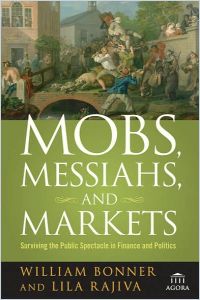 With scimitar-sharp wit, withering one-liners and sledgehammer-subtle analysis, William Bonner and Lila Rajiva embark on an amusing and fascinating study of human nature. Along the way, they skewer just about everyone – Republicans, Democrats, fascists, communists, CEOs, hedge-fund managers, journalists and patriots all line up for a good tongue-lashing from the authors. Funny, irreverent and thought-provoking, this treatise is a joy to read, even if you don’t agree with all of Bonner’s and Rajiva’s conclusions. (And who could?) Human nature itself is the true villain in this sweeping work. Enjoyable as it is, this study tackles too much and at times turns into little more than a rant, albeit a readable and persuasive one. Even so, getAbstract recommends it to anyone who hopes to understand human behavior in business and politics.

William Bonner is president and CEO of a financial-newsletter company. He created the Daily Reckoning, a contrarian financial newsletter, and co-authored Financial Reckoning Day and Empire of Debt. Lila Rajiva is a journalist and author of The Language of Empire.

What do Adolf Hitler, Benito Mussolini, Osama bin Laden, George W. Bush and Alexander the Great have in common? Not much, at first blush. But on closer inspection, they do share something. All are first-rate world improvers. They belong to a class of “do-gooders gone bad” who believe they know what’s best for everyone else, and that they can impose their will on the rest of the world – whether the rest of the world likes it or not.

The atrocities of Hitler, Mussolini and bin Laden are well-documented. George W.’s do-gooder tendencies were exposed by his foolhardy decisions to invade Afghanistan and Iraq in an attempt to turn ancient civilizations into Middle Eastern versions of the United States. Bush followed in the footsteps of Alexander the Great, another world improver who conquered the Middle East only to find he couldn’t permanently bend the world to his will.

George W. Bush is not the only one who’s narcissistic enough to believe that he can miraculously morph Mesopotamia into a democracy. Tony Blair is his accomplice, as are the American people who suddenly have made it their mission to fix the rest of the world. No longer do...

Beyond Sunni and Shia
7
Reboot
9
Pakistan Under Siege
8
Can It Happen Here?
8
Bloodlands
10
The Square and the Tower
8