Summary of A Call To Service 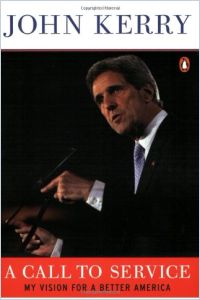 Former President Bill Clinton once remarked that running against an incumbent president is like an extended job interview with the American people. First you must convince them to vote the other fellow out of office, and then you must convince them that you would be a suitable replacement. In some ways this book is John Kerry’s extended epistle to the American people, explaining why he’s the right man for the job. Author Kerry demonstrates an impressive grasp of the issues, and yet explains them in a Clintonesque, common-sense manner. The book uses italicized anecdotes from Kerry’s past, pastiches cleverly woven throughout its fabric, to give the reader a sense of Kerry’s past without dwelling on it. This is much more a book about the future, and Kerry’s vision for America and how he intends to achieve it. getAbstract.com recommends this most highly for those who seek a better understanding of the man carrying the Democratic banner into the electoral battle.

John Kerry, a graduate of Yale University, is a highly decorated Vietnam veteran who served in the U.S. Navy and was awarded a Silver Star, Bronze Star with Combat V and three Purple Hearts. Expected to hotly contest George W. Bush for the U.S. presidency, he is currently serving his fourth term as a Senator from Massachusetts. He is married to Teresa Heinz Kerry, has two daughters and three stepsons, and lives in Boston. His book on the global war on crime and terrorism, The New War, was published in 1997.

Why Run the Race?

I am "a child of the greatest generation of Americans." As my parents before me, I always believed that my children would have more opportunity than I did. That's the promise of America and I am running to keep that pledge to future generations. The United States' finest days lie ahead. Each American has inherited something precious: the birthright of freedom, a chain of responsibility that stretches back to the Founding Fathers.

In World War II, my father flew DC-3s in the Army Air Corps. After the war, he entered diplomatic service and helped forge an international alliance against tyranny with measures such as the Marshall Plan and NATO. While he served his country, my mother, Rosemary, became an activist and environmentalist. My grandfather was an Austrian Jew who converted to Catholicism. My wife and I are both "believing and practicing" Catholics.

Raised with a sense of patriotism, I joined the Navy during the Vietnam War and commanded a gunboat patrolling the Mekong Delta. When I returned, I felt another call to service. I began to protest the very same war, while never forgetting to honor those who fought before me, with me and after...