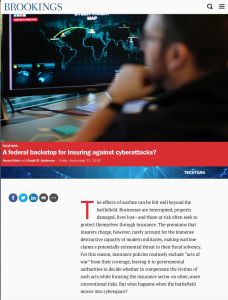 A Federal Backstop for Insuring Against Cyberattacks?

Technology is challenging insurers’ long-held notions about coverage, as cyberspace increasingly becomes the locus of liability. Insurance companies have excluded coverage for losses due to “acts of war” for more than 100 years. But conflicts between nations and attacks by terrorists have moved online, threatening commercial interests and the insurance industry’s long-term solvency. This thought-provoking exploration of sector challenges from experts Aaron Klein and Scott R. Anderson offers important considerations for state officials and financial executives.

Since before the start of the 20th century, insurance companies’ policies have excluded coverage for destruction arising from “acts of war” because of the enormous costs. In times of conflict, it is up to the government to provide compensation, if any, to those whose lives are disrupted by military violence, leaving private insurers to concentrate on more common forms of risk.

In response to the September 11, 2001, terrorist attacks in the United States, Congress enacted the Terrorism Risk Insurance Act...

Aaron Klein and Scott R. Anderson are fellows at the Brookings Institution.

What is a financial transaction tax?
8

Four Questions to Ask Before Breaking Up the Banks
9

No, insurers may not have a good case to decline business interruption claims
8

The Future of Insurance
7 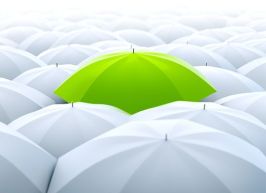