Summary of A Full Life 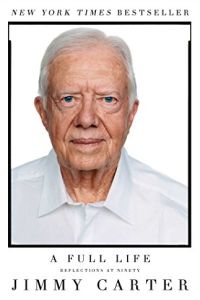 Jimmy Carter’s time as 39th president of the United States, from 1977-1981, was a powerful, brief episode in a life of challenges and rewards. Carter comes across as an intelligent, accomplished, good-hearted man who puts actions behind his commitments to human rights, to making the world healthier and more peaceful, to his faith, to his love of learning and to being an engaged leader. Carter, a winner of the Nobel Peace Prize, reflects on how he ascended the political ladder, including his achievements and problems in office, his work with The Carter Center and ongoing issues that remain priorities for him in his 90s. In light of today’s events, Americans and global citizens are likely to find his tone, perspective and insights compelling. Carter’s poetry and artwork add personality. His text is remarkably concise, given its broad scope, and may lead readers to Carter’s other books. This memoir shows how one person can create lasting change.

Jimmy Carter served as the 39th president of the United States; he's a Nobel Peace Prize winner and a Pulitzer Prize finalist. With his wife Rosalynn, he founded The Carter Center in 1982. It works to improve life for people worldwide by supporting democracy, freedom, health, human rights and peace.

Jimmy Carter was born in October 1924 to Earl Carter and Lillian Gordy. The family lived in Plains, Georgia, a town of approximately 500 residents. When Jimmy was four, his father bought a farm in Archery, two miles to the west of Plains. Carter’s childhood home didn’t have insulation or running water. Electricity arrived around 1940. As a youth, Carter boiled and salted peanuts, then sold them in small bags. He learned carpentry, woodworking and welding, chopped cotton, and plowed with draft animals, covering 22 to 25 miles in a day.

Of the 200 people in Archery, the Carters and a railroad foreman were the only white residents. Jimmy grew up with African-American neighbors and played with their kids. When he was young, he wasn’t aware of legal and social separations between blacks and whites.

As he became a teenager, he experienced the unspoken distinctions that defined relationships between the black and white communities. He watched his father treat black customers and employees with respect. However, Earl Carter insisted on the separation of races, while Jimmy Carter always favored equality. At ...