Summary of A Great Place to Work for All 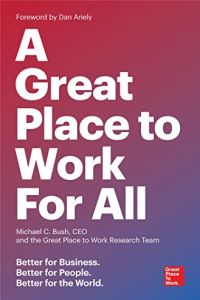 Author Michael C. Bush, the CEO of Great Place to Work, asserts that companies must maximize their employees’ human potential, since competitive strength today comes from your workforce and its performance. In the past, businesses valued knowledge workers for know-how and problem-solving skills. As computers become increasingly competent, certain skills might no longer command premium salaries. However, software can’t incorporate essentially human characteristics like creativity and passion. For that you need dedicated employees. Managers who develop their workforce’s human potential and build an inclusive, high-trust culture can boost productivity, flexibility and innovation. Bush and his research team detail the Great Place to Work For All approach, but could do more to place it in a broader organizational behavior framework. getAbstract recommends their worthwhile data and solid advice to executives and HR professionals.

John Chambers spent two decades as the CEO of Cisco. During that time, Cisco’s revenues increased from $1.2 billion to $47 billion. Cisco created the structure for today’s Internet. In many ways, Chambers acted like a conventional executive who always sought to win. Yet his beliefs differentiated him from many other leaders. He realized that to succeed, he needed to tap into the strength of his employees.

Chambers offers cautionary advice about the “emerging digital economy.” At present, the web connects to about 17 billion devices. By 2028, he says, it will link to 500 billion devices. Businesses will confront an avalanche of data they must decipher and act upon. As a result, firms will find that they must entrust decision-making authority to employees...

The Inside Gig
9
Women, Minorities, & Other Extraordinary People
9
Build It
8
Work Inspired
7
What Are Your Blind Spots?
9
Cracking the Leadership Code
9