Summary of A Hole in the Wind 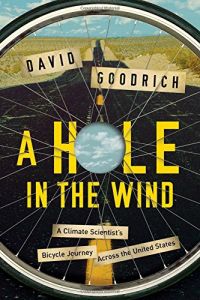 Retired climate scientist David Goodrich biked diverse trails that reflect the history of the United States. He weaves stories about these trails with his personal experience to highlight the growing emergency of climate change. Pondering western movement into the frontier, the paths slaves followed in search of freedom and remembrances of the genocide of Native Americans, Goodrich goes beyond theory and paints vivid portraits of places and people. He discusses how rising seas, tornadoes, drought, wildfires and diminishing species affect them. Goodrich’s inspiring, picaresque tale will intrigue the climate curious, and fans of a good road trip.

David Goodrich, a retired climate scientist, dipped his bicycle’s tire into the Atlantic Ocean as a ceremonial beginning to his cross-country bike tour. Months later he would dip his tire into the Pacific on the Oregon coast. In between, he averaged biking 56 miles (90 km) per day. His main route was the TransAmerica Trail that closely parallels the route of explorers Meriwether Lewis and William Clark. Goodrich sought to reach a better understanding of the risks of doing nothing about climate change. He set up 17 presentations for a variety of audiences, but he found people would rather not talk about it, despite the evidence all around them.

Goodrich’s first stop was coastal Delaware, where rising sea levels are decimating barrier islands. He found that the coastline in Prime Hook had eroded severely since the 2008 storm season. Plummeting migration means that wading bird species proliferate. Locals don’t mind cleaning up after intense and frequent storms; only the increase in flooding is giving them pause.

Explainer: Nine ‘Tipping Points’ that Could Be Triggered by Climate Change
8
WMO Statement on the State of the Global Climate in 2019
9
Geoengineer Polar Glaciers to Slow Sea-Level Rise
8
Symphony in C
9
Adapt Now: A Global Call for Leadership on Climate Resilience
8
Technology Quarterly: Towards Zero Carbon
10 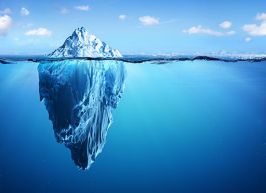