Summary of A Year Without "Made in China" 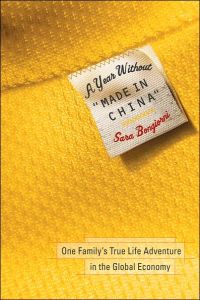 From head to toe, American consumers are walking advertisements for products from China. But few shoppers realize the depth and national economic implications of their dependence on "Made-in-China" goods. Writing with heart and precision, Sara Bongiorni – who decided that her family wouldn't buy Chinese merchandise for a year – uses trade data, shopping mishaps and family squabbles to outline the complex relationship between Chinese merchandise, U.S. consumers and American job loss. Her narrative is funny, factual and entertaining. She delivers insightful lessons about trade, manufacturing and finance. The author attempts to avoid China-bashing and repeatedly mentions her distant Chinese ancestry, but the book occasionally steps into the uncomfortable territory of nationalism on the subject of race and international commerce. Still, this is a delightful, informative read. getAbstract recommends it for every shopping list.

Sara Bongiorni, a seasoned business reporter, has written for daily newspapers and regional periodicals in Louisiana and California.

The trade numbers are overwhelming. In 2006, about $290 billion worth of Chinese merchandise was sold in the U.S., the destination for roughly 25% of China's exports. In nearly every niche of the consumer products market, China is the lowest-cost producer. But the U.S. consumer's comfortable, gadget-filled lifestyle carries a hidden price tag in the form of fewer domestic jobs, industries and factories. About two million American jobs have moved to China as the trade gap has skyrocketed to nearly $202 billion (2005). Aware of the long-term economic costs of the "Made-in-China" label, some U.S. consumers have deliberately turned away from Chinese imports. But is it realistic and practical to function without electronics, flip flops, toys and other trinkets from China? One family decided to find out and launched a 12-month boycott of Chinese goods.