Summary of Across That Bridge 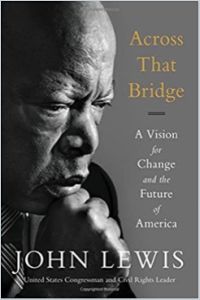 The review below was first published in the getAbstract Journal on Jul 24, 2020.
We’ve reviewed this title for you as we currently cannot offer a summary.

The late Congressman John Lewis details his journey from a young sharecropper to a civil rights pioneer crossing that famous bridge where he and other activists changed American history.

John Lewis, a “lion of the civil rights movement,” chaired the groundbreaking Student Nonviolent Coordinating Committee (SNCC) and participated in its Freedom Rides in 1961. During the 1962 March on Washington, where Dr. Martin Luther King Jr. gave his immortal “I Have a Dream Speech,” Lewis was the youngest keynote speaker. In 1965, when he marched across the Edmund Pettus bridge outside Selma, Alabama to demonstrate for civil rights, an Alabama state trooper beat him severely and left him with a skull fracture. Lewis became a member of the US House of Representatives from Georgia in 1981 and served as “the conscience of the Congress” until his death in July 2020. This book is his remarkable memoir, told with straightforwardness, clarity and little sentimentality.

Lewis details his journey through rural Alabama, the 1960s-era voting rights protests and Congress. With vivid detail and a front-row perspective, Lewis offers an inspirational spiritual and practical discussion about bigotry, discrimination and the quest for truth. He provides a relevant, timely map for change and a call for civil action.