Summary of Adapt Now: A Global Call for Leadership on Climate Resilience 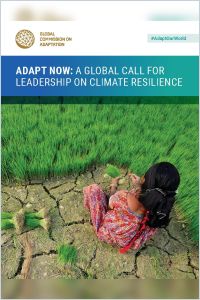 As calls for immediate action on climate change grow louder, the Global Commission on Adaptation has launched a series of summits connecting government, scientific and business leaders. The Commission, led by Ban Ki-moon, Secretary-General of the United Nations, Kristalina Georgieva, CEO of the World Bank, and Bill Gates, suggests adaptation methods to protect food and water supplies, infrastructure, and ecosystems. This sobering report will reassure people that, if leaders take decisive actions, the situation can be changed. If they do not, the world may quickly deteriorate.

The Global Commission on Adaptation is led by Ban Ki-moon, 8th Secretary-General of the United Nations, Bill Gates, Co-chair of the Bill & Melinda Gates Foundation, and Kristalina Georgieva, CEO, World Bank. It is guided by 34 Commissioners, consisting of leaders from political, business, multilateral, and scientific worlds.

The Global Commission on Adaptation, co-managed by the World Resources Institute and the Global Center on Adaption, plans to discuss eight specific Action Tracks incorporating technical, political and financial support for climate change adaptations. A series of summits will include government representatives, scientists and business people from around the world.

Incremental climate change strategies may work to address some issues. But even by employing the most stringent adaptations, sea level rise will cause millions of people living in flood and storm prone areas to relocate. Farmers will face tough decisions about how and where to plant crops because of increasing heat and drought. As the global demand for food increases, climate changes suppress its production. New technologies must be developed so that farmers can thrive.

Ecosystems are nature’s first line of defense against extreme weather and warming oceans. Humans depend on Earth’s natural environment for...

WMO Statement on the State of the Global Climate in 2019
9
Our Final Warning
8
Explainer: Nine ‘Tipping Points’ that Could Be Triggered by Climate Change
8