Summary of All In 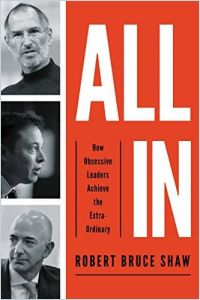 Phenomenal leaders like Jeff Bezos, Steve Jobs and Elon Musk come along rarely, even among the ranks of elite leaders. Robert Shaw performs an important service for careerists and organizations alike by profiling the pros and cons of their all-consuming drive and answering the question: Does relentless drive pay off for individuals and firms? In what could substitute for a long but brilliant commencement speech, Shaw posits that little of great importance or achievement ever happens without obsessive leaders. But for most people and firms, he concludes, the sacrifices and risks probably exceed the gains.

Robert Bruce Shaw’s consultancy, PMCG, help teams and firms improve their  performance. He is also the author of Extreme Teams and Leadership Blindspots.

Jeff Bezos, Elon Musk and Travis Kalanick share focused obsession on a single goal and the ability to inspire a similar commitment in others. Accomplishments like theirs – and the late Steve Jobs’s – means accepting intense, near-constant stress and having less time for family and relationships.

Working with obsessives means accepting their trade-offs. For example, Jobs’s perfectionism led him to berate employees in public. Bill Gates openly toyed with the idea of ousting Microsoft co-founder Paul Allen when Allen’s performance dropped due to his battle with cancer.Though some argue that a leader with a collegial style achieves more, those who work closely with extraordinarily successful leaders contend that the impossible demands they put on themselves and others are essential to their success.

Though obsession is a powerful force for achievement, it becomes a double-edged sword.

Obsession leads as often to individual or organizational disaster as to stratospheric...