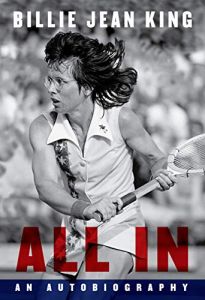 The review below was first published in the getAbstract Journal on Jan 6, 2022.
We’ve reviewed this title for you as we currently cannot offer a summary.

Billie Jean King captures her life, career and the times that shaped her, on and off the court.

In this New York Times bestseller and Washington Post Best Book of the Year, Billie Jean King – winner of 39 Grand Slam tennis titles, the first female athlete to receive the Presidential Medal of Freedom, co-founder of World TeamTennis, and founder of the Women’s Tennis Association (1973) and the Women’s Sports Foundation (1974) – tells her life story with the collaboration of Johnette Howard and Maryanne Vollers.

Autobiographies featuring multiple authors always raise questions of whose voice the reader experiences. But Howard has written of women tennis players before and Vollers movingly covered a North Korean’s struggles for freedom. Both are accustomed to telling other peoples’ stories while staying out of the way. King is a dominant personality, to say the least, and she shines through in this text. Readers can assume this is her voice, however honed.