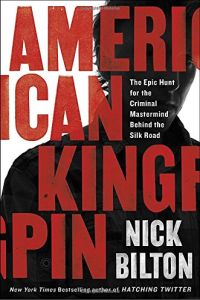 Nick Bilton’s account of the rise and fall of the drug-dealing Silk Road website is an engrossing true-crime techno-thriller. After finishing college, Ross Ulbricht returned to his Texas hometown and, working mostly alone on a laptop and teaching himself programming as he went along, he built an anonymous online marketplace for drugs and other contraband. Over the next three years, he restyled himself as the Dread Pirate Roberts, scooped up millions in profits, began ordering hits on his enemies and inspired a massive manhunt involving four US federal agencies. You’ll meet a cast right out of a screenwriter’s dreams: noble crime-fighters, dirty cops, a sleuthing IRS agent and villains who range from the chillingly efficient to the comically inept. The inscrutable figure of the Dread Pirate Roberts is at the center – a man capable of altruistically clearing litter from a park one day and sanctioning the sale of cyanide and human organs the next. getAbstract recommends this saga to cyber-security specialists, drug-policy officials, those interested in drug policy and people who relish ripped-from-the-headlines nonfiction.

Special correspondent for Vanity Fair and CNBC contributor Nick Bilton was formerly a columnist for The New York Times.

“The Amazon of Drugs”

Working on a laptop in his Austin, Texas, apartment, Ross Ulbricht created an international online drug empire, the Silk Road website. Independent dealers used it to sell everything from marijuana to heroin. Customers browsed anonymously and paid with untraceable bitcoins. Dealers sent drugs through the mail. Ulbricht, who called himself the “Dread Pirate Roberts” on the website, was a libertarian. He believed that the Silk Road freed its users from the laws of a government he considered illegitimate. Putting him out of business and closing the Silk Road required a manhunt involving officers from four US federal law enforcement agencies.

The man who would become the Dread Pirate Roberts was an unlikely candidate for the role of a ruthless drug lord. In 2010, Ross Ulbricht returned to his native Austin after earning a master’s degree from Penn State’s Department of Materials Science and Engineering. At home, Ulbricht hunched over his laptop, writing programming code for his libertarian vision: an anonymous marketplace where people could buy or sell anything. Ulbricht believed this would...