Summary of And Then All Hell Broke Loose 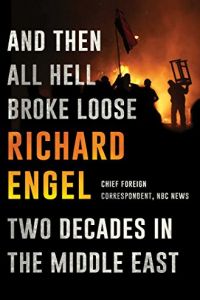 Foreign correspondents trek into dangerous territory, braving language barriers, cultural hurdles and unfriendly officials – not to mention tear gas, rubber bullets and mortar rounds. Ideally, they bring back stories that help us understand faraway conflicts. NBC television journalist Richard Engel delivers a clear-eyed account of the Middle East’s two-decade descent into chaos. After graduating from Stanford in the 1990s, Engel worked in Egypt in the early days of the Muslim Brotherhood, moved to Jerusalem as the Second Intifada heated up and headed to Baghdad before the 2003 US invasion. Engel learned Arabic and gained an understanding of Middle Eastern cultures. Writing engagingly in short, clear sentences, he combines religious history and political context with on-the-ground observations and the occasional grisly detail. While always politically neutral, getAbstract recommends Engel’s report those seeking insight into a contentious region.

Richard Engel is chief foreign correspondent for NBC News. This is his third book about the Middle East.

After the “Big Men,” Chaos

The 1990s were the peak of the era of the “Arab big men,” ironfisted dictators who demanded fealty and murdered their opposition. This roster included Saddam Hussein in Iraq, Hosni Mubarak in Egypt, Hafez al-Assad in Syria, Tunisia’s Zine Al Abidine Bin Ali and Libya’s Mu’ammar Gadhafi. Every Middle Eastern strongman followed a similar playbook of secularism, corruption, brutality and indifference to people’s everyday lives. By 2013, the tyrants were gone. Though evil and bloodthirsty, the big men were predictable. They remained in power for decades by knowing just how far they could push. Instead of the democracies that US president George W. Bush promised in the wake of Saddam Hussein, the big men gave way to chaos.

That turmoil all lay ahead when reporter Richard Engel arrived in Egypt in 1996. After graduating from Stanford, Engel decided the Middle East would be a fertile place to ply his trade. He saw dictatorships as resembling “a row of decaying houses that looked ornate, impressive and sturdy from the outside,” but rife with unspoken dissent and seething resentments. Religious fundamentalists disapproved...

ISIS
8
Kings and Presidents
8
America’s War for the Greater Middle East
9
Fragile Nation, Shattered Land
7
Beyond Sunni and Shia
7
America edges back into the Middle East
7