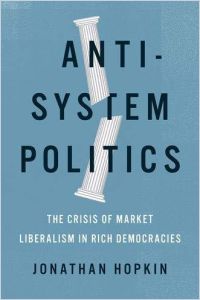 In this intriguing look at Brexit, Donald Trump and other disruptive political phenomena, Jonathan Hopkin argues that the surprise political results in 2016 weren’t really about immigration, racial tensions or other social issues. Rather, the British political scientist asserts, voters were simply fed up with the neoliberal status quo. The masses watched greedy financiers lead the global economy into crisis, then escape with bailouts that left the rich richer and everyone else struggling to stay above water. In short, when it comes to “anti-system politics,” it’s all about the money.

Jonathan Hopkin is an associate professor of comparative politics at the London School of Economics and Political Science.

Voters in wealthy nations are in full revolt against the status quo.

After the 2016 victories of Donald Trump and of the Brexit campaign, many observers concluded that the world was entering a new era of anti-immigrant, right-wing nationalism. That’s true to an extent, but it misses the bigger picture: Voters of all ideological stripes are, increasingly, registering their displeasure with business as usual. In Spain, Catalan nationalists abandoned their centrist positions to embrace strident secessionism. In Britain, Labour Party members made the far-left Jeremy Corbyn their standard-bearer. In the United States and Europe, left-wing voters recoiled at government bailouts of banks and at rising inequality.

“Anti-system politics” has emerged across the political spectrum. Fundamentally, anti-system voters are frustrated with political systems they perceive as broken and with economies that reward only the wealthiest. The phrase “anti-system” dates to the 1960s, but the concept gained new relevance after the global financial crisis of 2008. In the aftermath of the crisis, many voters concluded that neoliberal democracy, founded upon free...