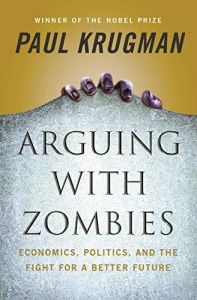 Economics, Politics, and the Fight for a Better Future

The review below was first published in the getAbstract Journal on Nov 4, 2021.
We’ve reviewed this title for you as we currently cannot offer a summary.

Nobel Prize-winning economist Paul Krugman, a professor at the City University of New York, is also a columnist for The New York Times. In this bestselling collection of his essays on an array of topics, Krugman skewers the “zombies” who make false or misleading claims about the economy.

In 21st-century America...accepting what the evidence says about an economic question will be seen as a partisan act.Paul Krugman

The Washington Post called this “a revelation [that] showcases Krugman’s intelligence and gift for clear, accessible writing.” The Atlantic, however, raised an intriguing question: “How [did] so talented and fortunate an author…develop such a furious and bitter voice?” The answer: Krugman, once an apolitical technocrat, “contends he didn’t change. Politics did.”

The Power of Creative Destruction
8
Article

What was the big story in economics over the last decade?