Review of Astrophysics for People in a Hurry 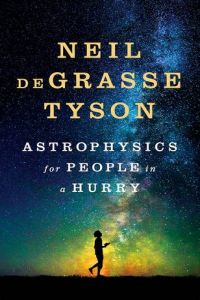 The title of astrophysicist Neil deGrasse Tyson’s book is certainly accurate. He begins with a plunge into the universe prior to the big bang and immediately explodes outward into explanations of a changing cosmos. Tyson explains with passionate enthusiasm where elements come from, why stars and planets are round, why galaxies take the shape of tortillas and much more. His renown and respect in his field generates an almost instant reader trust. Tyson’s writing is lively and approachable; he deals with every topic with humor and good will. You may feel as if a knowledgeable friend is explaining the universe to you – one worthy analogy or pop culture reference at a time.

However, Tyson’s strengths can at times turn into his weaknesses: He moves so fast through scientific principles and topics that he may well lose those readers who might appreciate more detail and context. Perhaps he recognizes that most people don’t want to understand the scientific principles; they just like hearing him explain the universe’s function. Tyson provides a compelling read for anyone interested in science, the nature of the universe and clear explanations of complex phenomena.

Astrophysicist Neil deGrasse Tyson, PhD, is director of the Hayden Planetarium, which is part of the American Museum of Natural History.

Tyson explains that the known universe began roughly 14 billion years ago. At that time, the entire universe and everything in it was smaller than the dot at the end of this sentence. This tiny point was intensely hot. The forces governing the universe were all unified. Then came the big bang. In less than a second, the unified forces began to differentiate, eventually becoming the forces that people know today – gravity, electromagnetism, and the strong and weak nuclear forces. Matter coalesced into a wide array of subatomic particles – electrons, neutrinos and quarks. Tyson details this phenomenon in simple, clear prose. He almost makes the incomprehensible comprehensible.

After the big bang, the universe cooled, expanded and became less dense. Quarks formed heavier particles – hadrons – which allowed the creation of neutrons and protons. Early activity featured a crucial asymmetry. Matter outnumbered antimatter, if only barely: Tyson cites a ratio of “a billion-and-one to a billion.” Without this imbalance, matter and antimatter would’ve obliterated each other in a blaze of light. When the universe was roughly one second old, it had cooled to a billion degrees. At this point in the book, lay readers may feel the tops of their heads lift off, as Tyson presents these mind-blowing concepts. 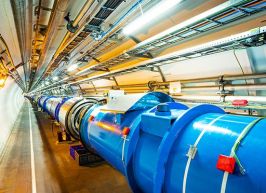