Summary of Beyond Biocentrism 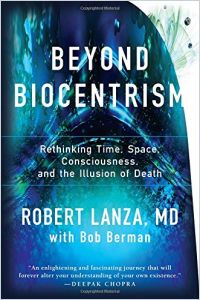 At once disconcerting and comforting, biocentrism challenges humanity’s shared beliefs regarding the universe, the origins of life, time and consciousness. If the approach of “renegade thinker” Dr. Robert Lanza and science editor Bob Berman to these topics and others resonates, you may enter a realm of transcendence and bliss that will reshape some of your most fundamental beliefs. But should some of their concepts remain opaque, you will still gain rich, nourishing and, at times, upsetting food for thought.

Scientist, medical doctor and philosopher Robert Lanza also wrote The Grand Biocentric Design and One World. Bob Berman edits science for the Old Farmer’s Almanac and has contributed to Astronomy and Discover magazines.

People from every era and civilization have pondered the universe and the essence of life.

Common beliefs surrounding time, space, causality and the origins of the universe have come under increasing doubt as scientists observe new, incredible phenomena in nature and in the cosmos.

In the face of these realizations, an ancient understanding of consciousness – one limited to the realm of philosophy until recently – has begun to emerge in observed science.

Contrary to popular thought, life and consciousness did not arise by happy accident within a cold and indifferent universe. Consciousness and life caused the universe and contain all the cosmos.

The big bang theory of the universe’s origins may leave you wondering how that resulted in complex life and consciousness – and what came before? No one knows. Scientists once thought the universe is expanding more slowly now than in the past. Now, they believe it expands faster than ever. New discoveries continually disprove old theories and beliefs.

A World Beyond Physics
8
Novacene
8
Can Lab-Grown Brains Become Conscious?
8