Summary of Beyond the Label 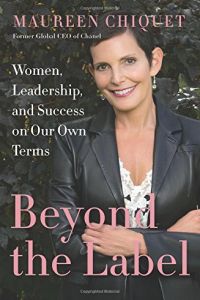 Unlike authors of many leadership books, Maureen Chiquet strives to teach by example. From her childhood fascination with everything French, her education at Yale, her first job at L’Oréal, her career climb at The Gap to become president of Banana Republic and, finally, her years as global CEO at Chanel, she reveals her experience as a business leader, a wife and a mother. Her successes, failures and defining moments – at work and at home – impart valuable lessons you can get only from a first-person account. Strivers at any stage of their careers will enjoy her engaging success story.

Maureen Popkin Chiquet was the global CEO of fashion house Chanel from 2007 to 2016. She is the former president of Banana Republic and helped launch Old Navy.

Maureen Popkin Chiquet was born in 1963 and grew up in Creve Coeur, a suburb of Saint Louis. Her father was a litigation lawyer and wine connoisseur, and her mother loved the arts. She was a quiet girl who worked hard in school and adored books and movies. Her mother took her and her two sisters to museums and theaters and on nature hikes to cultivate their interest in aesthetics and an appreciation for beauty.

Chiquet attended public schools until age 15, when she transferred to a co-ed private school. There, she had her first encounter with anti-Semitism when someone spray-painted “Dirty Jew” on her locker. It made her feel like an outsider who didn’t quite blend in. Chiquet was sensitive to society’s push for people to be alike. Her desire to please others and avoid disapproval helped her succeed, but eventually became self-limiting.

Two teachers had a strong, positive influence on her. Her acting teacher drew her out of her shell and taught her how to listen and put herself in another person’s shoes. Practicing empathy and developing self-awareness helped her later in her professional life. It also gave her a chance to try on different...

Legacy in the Making
8
What Happened
9
Heartland
9
The Stuff
9
Girl, Wash Your Face
8
The Book of Gutsy Women
9