Summary of Beyond Viral 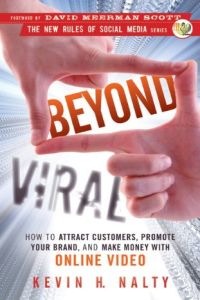 Kevin Nalty, affectionately known as “Nalts” by YouTube fans, is one of the website’s most-viewed personalities. He’s also an experienced marketer who has worked with Coca-Cola, Microsoft, Starbucks and Fox Broadcasting. Here he helps fellow marketers use the evolving world of online video sharing to promote their brands. Not surprisingly, a dominant underlying theme is the wisdom of collaborating with established “weblebrities” who already have a large, loyal audience – such as Nalts himself. The book offers gems of knowledge, but it’s quite disorganized, so they’re tricky to find. getAbstract suggests that the book may be more helpful to webstar wannabes who are already familiar with the subject.

The standard definition of “online video” refers to video content people view on their computers. However, this definition is evolving with smart phone technology that allows individuals to view videos on their mobile devices. The world’s number two search engine, YouTube, is the dominant video-sharing site. Hulu is in second place, according to the market research company ComScore. Audiences for online video sites are growing steadily, while television and print continue to lose viewers, readers and also revenues.

YouTube, which began as a community of creators and viewers, developed into a hugely popular social media site. It’s easier to access than Facebook and Twitter because you don’t have to register or create a profile. People using the Internet are more likely to watch a video than visit a social networking site.

Content created by “webstars,” musicians and professionals generate most of YouTube’s revenue. Webstars, also known as “YouTube Stars” or “weblebrities,” are amateurs whose videos gain a substantial, loyal audience. Many develop a cultlike following – supporters with whom they interact and build relationships. Devoted viewers develop...