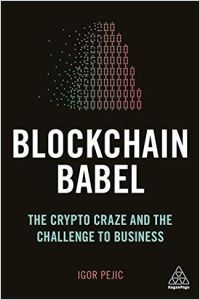 Gook luck to the layperson trying to make sense of bitcoin, cryptocurrencies and the blockchain. As banking and tech expert Igor Pejic notes, these topics elicit no shortage of both unfounded exuberance and reflexive fear. In this clearly presented overview, Pejic takes pains to deflate the hype while offering an even-handed analysis of the technology’s potential and risks. For instance, despite all the breathless headlines about bitcoin, Pejic sees no possibility that it will replace government-issued money or topple the major banks, but he does envision credible threats to payment providers. Technophiles and technophobes alike will find this a useful and engaging read.

Former journalist Igor Pejic is head of marketing at BNP Paribas PF AT and a media commentator on payments systems and blockchain.

Bitcoin was just an opening salvo in the development of blockchain technology.

Blockchain is a distributed ledger system that could radically upend industries that rely on recordkeeping, particularly the financial services sector. The technology allows cryptocurrencies and assets to move across a peer-to-peer network, one that operates outside the purview of central banks or regulated institutions. Traditional bankers are beginning to sweat. In 2015, Jamie Dimon, head of JPMorgan Chase, told shareholders that “Silicon Valley is coming.” Indeed, fintech start-ups are swarming into this promising new space. Tech leaders, venture capitalists and the media all see a “gold rush” on the horizon. But the tsunami of opinion about this new technology is coupled with a lack of intellectual rigor or clear-eyed analysis.

Financial institutions are keenly watching payment-transaction companies like PayPal. It gobbled up a lucrative corner of the financial business by adding a layer to the established payment system. Blockchain threatens – and promises – something far more disruptive. It could allow a dramatic overhaul of the payment processing mechanism...

Bitcoin’s Guardian Angel
9
Kings of Crypto
9
A beginner’s guide to how cryptocurrencies work
8
Bitcoin’s Greatest Feature Is Also Its Existential Threat
9
The Financial Services Guide to Fintech
8
What if bitcoin went to zero?
8