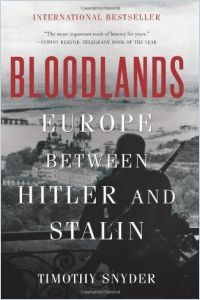 So much has been written about the atrocities committed in Eastern Europe during the 1930s and 1940s – not to mention all the feature films and documentaries – that casual observers of history might think they already know this story. Then along comes Yale historian Timothy Snyder, who recasts the drama of the 14 million people starved, shot and gassed during a 12-year period. Snyder precisely documents how Stalin and Hitler utilized the “bloodlands” – the borderlands between their nations – to execute their genocidal plans. Snyder’s great contribution is to “turn the numbers back into people.” getAbstract thinks his meticulous history should be required reading, particularly for new generations who may not understand the full horror or impact of Europe’s greatest murder mystery. And what is that mystery? It is not who committed the crimes or why; that is mostly known from this source and many others. Rather it is how each victim faced death, often in the most cruel circumstances, and how the killers, millions of people, and their witnesses, millions more, lived with these crimes, and even justified them.

With the end of World War I, Europe fractured, populations dispersed and emperors gave way to elected leaders. Eastern Europe, or the bloodlands, became a buffer between Germany and the Soviet Union. The territory stretched from the Baltics south through Belarus, Poland and the Ukraine. Here in the brackish currents of ethnicity, race and tribe, Stalin and Hitler pressed their ideologies and their dreams for empire – dreams that cost the lives of 14 million people.

In 1932, Soviet collectivization and bad weather undermined food production. To meet government quotas, farmers had to surrender their seed grain, leaving them with nothing to sow for the next year. By that summer, in Kazakhstan alone, more than a million people had starved to death. Stalin saw “the starvation of Ukrainian peasants as a betrayal by members of the Ukrainian communist party.” He ordered his loyal, forceful administrators to fix the problem, but the bad times returned. In the “Soviet famines of 1933,” more than five million people starved to death, mostly in the Ukraine. Instead of benefiting from the revolution, peasants were recast as enemies of the state and divided into classes...