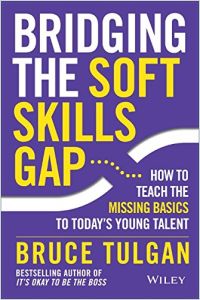 Many managers complain that generation Z employees (born between 1990–1999) “arrive late, leave early, dress inappropriately and spend too much time on social media.” While acknowledging that it never serves to paint an entire generation with too broad a brush, Bruce Tulgan reports that supervisors often find younger staff members lacking in “workplace citizenship.” He provides easy-to-follow, short but detailed lesson plans to help managers train gen Zers in soft skills, like collegiality, “professionalism, critical thinking and followership,” If you want your 20-something staffers to get along with people, develop self-awareness and focus on others, you may need to teach them how. getAbstract recommends Tulgan’s pragmatic counsel to managers who supervise gen Z employees and to young employees and job applicants, as well.

Bruce Tulgan is the founder and CEO of RainmakerThinking, a management research and training firm. He holds a fifth-degree black belt in classical Okinawan Uechi Ryū karate.

Consider a scene from a typical company featuring typical generation Z employees. As part of a “weekly lunch with the CEO” program, a Silicon Valley CEO spoke to a 22-year-old employee sitting next to him. “Did you just graduate this past May, or were you working somewhere else prior to joining us?” he asked the young woman. She said this was her first job. “Where did you go to school?” he asked her. She told him. The CEO said, “Did you do any part-time work while you were in school?” After a few more questions, the young woman replied, “That’s enough about me, alright? What about you? What’s your story?” Relating this incident later, the CEO chuckled and said, “I wanted to say, ‘My story? I’m your boss’s boss’s boss’s boss. That’s my story’.”

The young woman’s cheeky attitude wouldn’t surprise most people who manage gen Zers. While technically competent in the areas of “hard skills,” many gen Zers lack “self-awareness,” “problem solving,” “teamwork” and “people skills.” Thus, many workplaces suffer a gap between what managers regard as acceptable employee behavior and what they get from many – though, of course, not all – members of generation...

Not Everyone Gets A Trophy
8