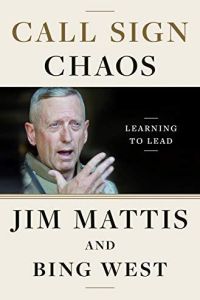 James Mattis, a Marine’s Marine whose call sign was “Chaos,” is a revered military figure and a scholar of modern warfare. He recounts 30 years of Middle East wars, when US resolve flickered, harming crucial alliances. As President Donald Trump’s secretary of defense, he felt those around him should have shared his values, but claims they did not. His memoir, written with historian Bing West, offers leadership advice, but scant insight into Mattis’s Defense Department tenure or his own nature. Like the old soldier he is, Mattis shares his practical knowledge while –disappointingly – keeping his own counsel about much else.

Retired Marine Corps general James Mattis served in the Obama and Trump administrations. Bing West is a combat veteran and historian at the Hoover Institute.

The principles of Marine Corps soldiering are “competence, care and conviction.”

Jim Mattis describes himself as a rough and ready kid from Richland, Washington. He had a penchant for roaming and, he recounts, his parents would take him to the edge of town, so he could hitchhike throughout the West as if this was not a strange parenting model. At 13, Mattis’s favorite books were The Call of the Wild and Captains Courageous; later, he came to love the classics, including Xenophon’s Anabasis.

At 17, Mattis went to state college, became a party boy and spent weekends in jail for underage drinking. He developed a fondness for mavericks. Mattis often told his generals and admirals to protect nonconformists and not to fear intellectual ambushes. Otherwise, he cautions, you’ll pay the price for a lack of innovation.