Summary of Chess Not Checkers 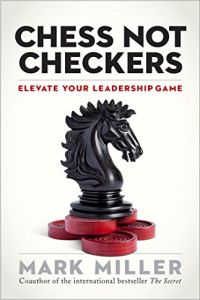 Most start-ups are small and easy to manage. They require minimal delegation; their leaders can handle most important tasks. While these firms are new, they can make simple, direct operational moves. They can play checkers – a surface-level, tactical game. But as they grow, their corporate life becomes more complex and more challenging to manage. Now, leaders must delegate. The competitive landscape grows more threatening. Therefore, those who run adult companies must play chess – a multilevel, strategic game. Management expert and storyteller Mark Miller explains how the leaders of growing organizations can use four chess principles to become entrepreneurial grand masters. He returns to some familiar characters from his past fables, and shares the way young CEO Blake Brown becomes a solid leader. Though the tale may be slight and a bit contrived, Miller uses it, as in his other bestsellers, as a readable vehicle for sharing insight and information. getAbstract finds that his checkers-to-chess metaphor delivers teachable leadership advice that will help entrepreneurs, managers, coaches, HR officials and mentors.

Chick-fil-A vice president for leadership development Mark Miller is a best-selling author. With Ken Blanchard, he co-authored The Secret: What Great Leaders Know and Do.

During most leaders’ early careers, they play checkers – a simple, reactive game. But as those leaders advance, they instead must play chess – a strategic game requiring forethought and planning. Small firms can get by early on with a “checkers mind-set,” but must switch to a “chess-not-checkers mind-set” as they grow and their operations become more complex.

Like chess grand masters making careful moves, strategic leaders must understand the special skills and talents of each team member and combine, leverage and exploit those capabilities for maximum competitive advantage and efficiency. Leaders should adapt four classic chess moves to attain their organizational goals and achieve superior performance. The fable of Blake Brown, a newly appointed CEO, illustrates how a chess-not-checkers mind-set and philosophy function.

A Bird in the Hand

Blake Brown was frustrated. His colleagues at Dynastar thought highly of him. Many believed he would eventually become part of his firm’s senior management. But despite 10 years in the business, Blake had not moved up the corporate ladder. Why hadn’t Dynastar rewarded him with a senior leadership...