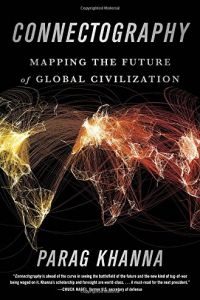 Geopolitical analyst Parag Khanna drives home the message that what connects people matters more than what divides them. His examination of today’s global network civilization resonates strongly, especially as populist movements and antiglobalization sentiments threaten to reverse the benefits of freer trade and more open borders. As an irresistible force for poverty reduction and higher living standards, connectivity will expand. Poor nations know their route to prosperity lies along the global supply chains and the new “Silk Roads” connecting modern cities and countries that care less about military power and more about commerce. Although Khanna could have delivered his message in half the page count, getAbstract recommends his far-ranging discussion to politicians, business leaders, economists and anyone seeking a contemporary interpretation of global dynamics grounded in reality rather than rhetoric.

Global strategist and consultant Parag Khanna specializes in relations between the United States and India, contributes to CNN, and conducts research for the National University of Singapore.

Khanna offers an insightful, eye-opening view of the world as it is in the early 21st century and as it might become. He tempers his enthusiasm with a warning here and a caution there. Even so, his insistence that hyper globalization – with its endless infrastructure and near unfettered global supply chains – will dominate the future and improve most people’s lives seems somewhat unrealistic. His suggestion that armed conflict among nations will end and that future disagreements will feature only bloodless negotiations about trade routes and access to markets seems somewhat optimistic. Since Khanna’s book came out in 2016, free trade and globalization have slowed and even reversed in much of the world. He might argue that this is a minor and brief interlude in a much larger movement. Perhaps so, but history demonstrates that one or two international incidents can lead to disruption and even global war.

Ultimately, Khanna provides a brilliant global perspective at the start of the 21st century. He includes 38 colorful maps, each offering a rarely seen view of the world or parts of it. Whether the maps show the impact of climate change or the extent of connectedness in some regions versus others, these illustrations will make you think differently about international dynamics. His explanation of the new power plays, especially China’s strategy, might surprise you. Khanna brushes aside notions of clashing civilizations and the need to “encircle” emerging powers. His take on the new competition among nations and cities makes sense and is both somewhat alarming and quite comforting.

Geofusion
8
Political Risk
10
Taking the Work Out of Networking
8
Face to Face
8
Crushing It!
9
The Soul of Money
8