Summary of Consciousness and the Brain

Viking, 2014
© 2014
From CONSCIOUSNESS AND THE BRAIN by Stanislas Dehaene. Summarized by arrangement with Viking, an imprint of Penguin Publishing Group, a division of Penguin Random House LLC
ISBN: 9780670025435
Pages: 352 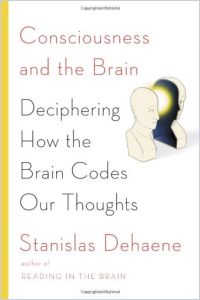 Eminent researcher Stanislas Dehaene, an expert on the cognitive neuroscience of language and number processing, synthesizes decades of scientific exploration into the nature of human consciousness. He presents complex concepts in exceptionally lucid language. Dehaene accesses the vital issue of consciousness by integrating art, philosophy and daily life into his discussion. getAbstract believes his analysis will challenge and enlighten anyone interested in thinking, consciousness, human nature or how science addresses subtle, subjective phenomena.

A premier researcher in the cognitive neuroscience of language and number processing and a winner of the million-dollar Brain Prize, Stanislas Dehaene is a director of the Cognitive Neuroimaging Unit in Saclay, France, and the author of The Number Sense and Reading in the Brain.

How do people talk, think and reflect on their actions? The idea of the mind and body split goes back to Plato. Descartes gave this separation its most explicit form, “dualism.” For much of the 19th and 20th centuries, understanding of the mind lagged behind other sciences. But, since 1995, a new “science of consciousness” has helped scientists define and study what consciousness is.

To winnow down the complex, vague concepts reflected in the term “consciousness,” focus on “conscious access.” You become conscious of whatever draws your focus. This definition aids understanding of more complex aspects of consciousness and allows researchers “to quantify what the ‘I’ feels and reports.” Scientists study consciousness by “manipulating conscious perception and carefully recording introspection.”

The contemporary study of consciousness tries to understand the subjective character of visual illusions. For example, how does an “objectively fixed visual display” of dots in a specific pattern move in and out of your consciousness? Studying illusions is simple; you see something, or you don’t. The experience...