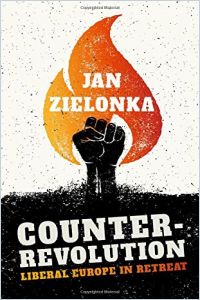 Why has populism flourished in Europe in recent years? In this clear-eyed account, academic Jan Zielonka analyzes why the continent’s politics have taken such a hard turn. His conclusion: Mainstream political leadership has grown cynical and complacent, and democratic institutions seem increasingly indifferent to the will of the people. At the same time, Europeans have become more anxious and fearful. Voters in France and Belgium, worried about terror attacks, are increasingly skeptical of the liberal prescription of open borders and multiculturalism. In Greece, Portugal and Poland, citizens fret about their jobs and wonder why their leaders don’t feel their pain. Despite his harsh critique of Europe’s system of liberal democracy, Zielonka is no populist. He repeatedly argues that he has no love for the counter-revolution, which he considers misguided. But Zielonka does see value in self-scrutiny, and he makes a strong case that liberalism – and the tolerance and rationality that accompany it – will survive only if its supporters understand and work to change what has gone wrong in recent years. getAbstract recommends hearing him out.

An Assault on Liberalism

A generation ago, Europe was in the midst of a full-fledged revolution, one that sought to extend liberalism to the formerly communist countries of Eastern Europe. In the years after the fall of the Berlin Wall, newly democratic nations built welfare systems and regulated markets. Openness and rule of law were the talking points of the day. Today, however, a reversal of this revolution is underway. Across Europe, countries are systematically dismantling their welfare states and de-regulating their markets. Debate in Europe is focused on shrinking states and rebuilding walls.

From Warsaw and Budapest to London, Madrid and Paris, a new wave of anti-liberal populism is sweeping Europe. A continent that once seemed a bastion of tolerance and liberalism now is characterized by anger and resentment. In 2016, British voters cast their ballots in favor of leaving the European Union – the very epitome of liberalism – even though respected politicians, journalists, academics and other experts made a strong, rational case for staying in the EU. The UK wasn’t the only place shaken by political upheaval. In Italy...