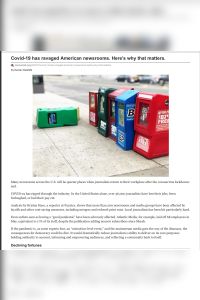 Damian Radcliffe, holder of the Chambers Chair in journalism at the University of Oregon, describes how the troubling trends of decline in the newspaper industry have accelerated during the coronavirus pandemic. He argues that journalism plays a vital role in a healthy democracy, drawing particular attention to its importance at the local level, where it drives civic engagement and holds government accountable. What will it take to preserve a “free and flourishing press” in the time of Covid-19?

Even before the coronavirus pandemic, United States newspapers’ newsrooms struggled.

From 2008 to 2018, US newspaper revenues dropped more than 60%, largely due to the migration of advertising to digital platforms and consumers’ changing patterns of media consumption. This loss of revenue led to shrinkage in the industry and a more than 50% reduction in the newspaper workforce.

“There’s a difference between your neighbors’ rumors and an actual reported piece that is subject to verification and to correction if it’s wrong.” – Margaret Sullivan, media columnist, The Washington Post

Of those whose jobs disappeared, some 27,000 were news-related reporters, editors, and still and video photographers. Efforts to shore up revenue loss by finding revenue sources beyond advertising, such as subscriptions, haven’t done much to shore up most newspapers’ financial health.

The Covid-19 pandemic rapidly made a bad newsroom situation worse.

More than 200 print news organizations have had to implement layoffs and other cutbacks, leading to furloughs or pay reduction for more than 36,000 journalists. Even an organization like Atlantic Media, which has seen its subscriber base grow by 90,000 during the pandemic, laid off 17% of its staff in May. Hopes for generating new revenue streams from alternate sources like live events have also faded in the face of the coronavirus. Salvation by subscription isn’t a promising strategy when millions of readers face financial crisis.

This loss of journalism, especially on the local level, could have severe consequences for democracy.

Journalism sustains democracy by being a watchdog of those in power, making citizens aware of crucial events in their communities and giving readers the information they need to take action. In smaller markets, local newsrooms especially have struggled; since 2018, more than 300 newspapers have gone under. There are 200 counties in the United States that don’t have a local newspaper, and many of the remaining papers publish only weekly. The surviving newsrooms include a large proportion of so-called “ghost newspapers,” operating with skeleton crews and doing little original reporting. Local news is an especially important resource during a public health crisis, when knowing what’s going on in your community is particularly relevant and urgent.

“It is the stories we don’t get, the ones we miss, pass over, fail to recognize, don’t pick up on, that will send us to hell.” – Molly Ivins, journalist

Media studies show that the consumption of local news goes hand in hand with involvement in civic matters. Without accurate and timely local reporting, local political races may see fewer participants – both candidates and voters – and government budgets are likely to balloon. Without journalistic oversight, local fraud and corruption are much more likely to go undetected. A trustworthy local news source can help citizens make sense of complicated problems and separate fact from “fake news.”

The time has come to explore alternative models to sustain the local news media.

Having a robust and free press reporting at the local and national levels is more important than ever. Do solutions exist that can address a failing economic model? Some analysts believe that the profit model of independent journalism has irrevocably failed.

“The business model itself was critically wounded by the internet and then social media even before news outlets were affected by the coronavirus. The truth is that now, journalism is beyond saving by capitalism alone.” – Matt Laslo, journalist

Future possibilities include public funding and the creation of not-for-profit news organizations, or perhaps the institution of a so-called “Google tax” on giant technology platforms that would fund independent news organizations. Ultimately, to obtain the support it needs to survive – whether directly from its audience or from another source – journalism must forcefully make the case for its vital importance in a healthy democracy.

Damian Radcliffe is a professor of journalism and an affiliate of the Department for Middle East and North African Studies at the University of Oregon where he also curates the “Demystifying Media” speaker series at the School of Journalism and Communication.

Race and the Newsroom
8
Tomorrow’s life-or-death decisions for newspapers are suddenly today’s, thanks to coronavirus
8
Inside China’s Audacious Global Propaganda Campaign
8
Coronavirus in China Fuels Crowd Psychology
8
The Event Industry Is Being Confronted By Its Napster Moment
8
The Social-Distancing Culture War Has Begun
8